Jos Buttler, the English cricketer, played some great cricket and helped his team in taking an invincible lead in the 3-match T20I series which is being played against Australia. The matches of the series are being organized at the Rose Bowl, Southampton, England, and the hosts must be very happy with their performance. 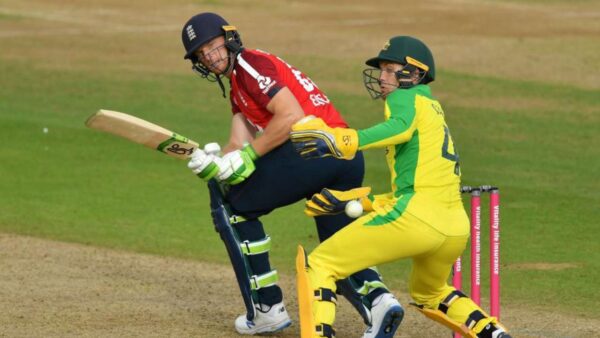 In the first match, the right handed batsman played a crucial innings of 44 runs while in the second match, he scored a match-winning 77. However, something happened in the first T20I which may have not been noticed by the Australian cricketers, especially the bowlers. Nevertheless, a cricket lover managed to see it and he also shared the information with the Indian spinner Ravichandran Ashwin.

If you remember, a controversy erupted in the IPL 2019 when Ravichandran Ashwin who was the skipper of Kings XI Punjab (KXIP) at that time mankaded Jos Buttler of Rajasthan Royals in an IPL match.

The Indian spinner was slammed by many for going against the spirit of the game but he was not deterred with it and maintained that whatever he did was as per the laws of the game and he would do it if he gets another chance. Jos Buttler was quite annoyed as well and let us inform you here that the English cricketer has been mankaded two times in his career.

Now coming back to the first T20 between England and Australia, the cricket lover noticed that Jos Buttler has not learnt from his mistake and he still leaves the crease before the bowler throws the ball.  The cricket fan tweeted to R Ashwin with the photos of Jos Buttler standing outside the crease while the bowler is on his way to throw the ball.

The tweet read, “He probably won’t see this. But just in case you do, @ashwinravi99 , this is your pre match viewing for whenever Delhi Capitals play Rajasthan Royals in the IPL.”

He probably won't see this. But just in case you do, @ashwinravi99, this is your pre match viewing for whenever Delhi Capitals play Rajasthan Royals in the IPL. pic.twitter.com/Xu1NpAiIc8

Ravichandran Ashwin will be playing for Delhi Capitals in the IPL 2020 while KXIP will be led by KL Rahul in this season.

Earlier, the head coach of Delhi Capitals and the former Aussie skipper Ricky Ponting made it clear that mankading is not an option for Delhi Capitals, adding that he would have hard conversation with R Ashwin regarding it.

It will be interesting to see whether R Ashwin will keep on playing cricket as per his style or he will be mending himself as per the instructions of DC’s head coach. What do you think in this regard?