The cricketing events are getting organized all over the world, though the spectators are not allowed inside the stadium as a precautionary measure to stop the spread of the lethal COVID-19 virus. Just recently, the IPL 2020 got concluded in UAE and the Big Bash League is also going to commence from the next month. Pakistan Cricket Board also decided to organize the remaining matches of the PSL which was conducted in February. These matches were postponed as coronavirus was spreading at a very high rate at that time.

The West Indian cricketer Sherfane Rutherford also went to Pakistan for taking part in the PSL. He plays for Karachi Kings and joined the squad in place of Chris Jordan who was not able to play due to his international commitments. Sherfane was instrumental in making his team win the Qualifier against Multan Sultans but something happened because of which the Karachi Kings franchise got heavily trolled on the micro-blogging site Twitter.

However, there was one more thing which caught the eye of cricket fans and that was the gloves of Sherfane Rutherford. The West Indian cricketer was playing for Karachi Kings but he was wearing batting gloves of the IPL franchise Mumbai Indians. Netizens slammed the Karachi Kings franchise for not being able to provide their players with basic cricketing equipments such as batting gloves. 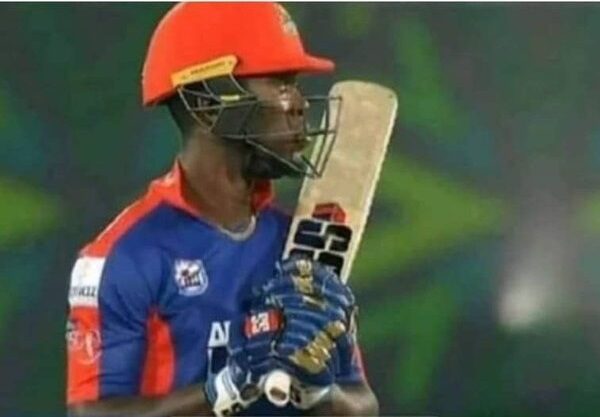 Here are some selected tweets:

Rutherford playing for Karachi Kings Used the Gloves he got from Mumbai Indians.

Did You Know? Rutherford was playing with Mumbai Indians Gloves.

Maybe they asked these players to make their own arrangement of kits.

Those two blows were Gold Dust..
All the best for the Final #MsVskk pic.twitter.com/kVvKiSndMb

Is this the Mumbai Indians' gloves? Blue and Golden pic.twitter.com/1UZFT5wodn

Rutherford using @mipaltan Gloves in a match of @thePSLt20
So they can't run a league with own equipments but claims to be bigger than @IPL.@KarachiKingsARY might be using Chinese Made Gloves, Which he doesn't trust.@sherfaneruther1 @Arzookazmi30#IPL2020 #AUSvIND #PSL2020 pic.twitter.com/tDRveeGvzh

Even when Sherfane Rutherford landed in Pakistan for taking part in the PSL, he was wearing the jersey of his IPL team Mumbai Indians and this can be ascertained by the welcome tweet which was posted by the official Twitter handle of Karachi Kings.

Sherfane Rutherford was a part of MI in the IPL 2020 but he didn’t play even a single match in the tournament.

What do you think of this whole episode? Let us know.