Virat Kohli Gives Epic Reply To Chahal Who Trolls Him & Asks, “Why Are You Wearing My Shorts?”

Virat Kohli, the Indian cricket team skipper who also leads the IPL team Royal Challengers Bangalore (RCB) must be quite happy nowadays as his team has started the IPL 2020 with a win. In their first match of the tournament, RCB clashed against Sunrisers Hyderabad (SRH) and won the match by 10 runs. 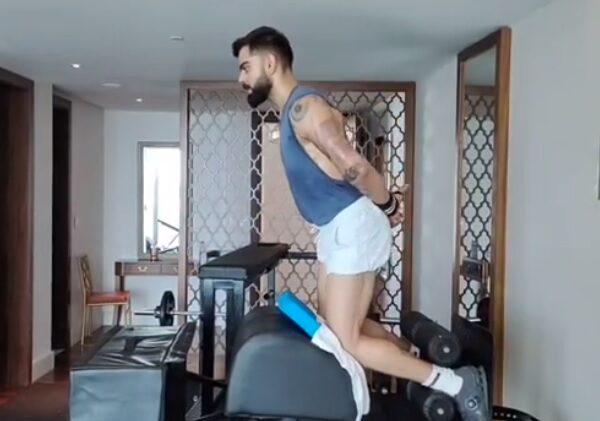 Virat Kohli is known to be a fitness freak and he can easily be termed as one of the fittest athletes of the world. The right handed batsman is very active on social media and keeps on posting his work-out videos on a regular basis.

Recently, Virat once again shared a video in which he was seen working-out and he captioned it, “Putting in some daily work to prepare for this heat

. Btw pls tag and ask @tipo_morris why he’s making those sounds in the background.”

Putting in some daily work to prepare for this heat

. Btw pls tag and ask @tipo_morris why he's making those sounds in the background

While fans loved it, Yuzvendra Chahal who is also a part of RCB decided to pull Virat’s leg as the shorts worn by Kohli was a little short in size. Yuzi asked the skipper why he was wearing his shorts.

Kohli also responded soon and wrote that he wore them because Yuzi doesn’t wear them.

While Yuzi is known for his witty and humour comments on the social media networks, there is one more cricketer who loves to have banter with the Indian skipper. We are talking about former England cricketer Kevin Pietersen who has tried to troll Virat Kohli many times earlier as well. KP wrote, “I’m more worried about the shorts you’re wearing?”

RCB is looking forward to win the IPL this time as despite being one of the strongest teams in many seasons, it has never won an IPL title. What makes it more surprising is the fact that Virat Kohli is being associated with RCB since the inaugural edition of 2008 and since 2013, he has been leading the team. RCB’s next match will be against Kings XI Punjab (KXIP) in Dubai on September 24.

The post Virat Kohli Gives Epic Reply To Chahal Who Trolls Him & Asks, “Why Are You Wearing My Shorts?” appeared first on RVCJ Media.